The Iranian Community in Belgium asks for…

Any “Diplomacy” with the Mullahs in Iran…

The Arabs and the People of Al-Amsaar…

A top U.N. expert is taking aim at the Trump administration’s efforts to tighten the screws on Iran’s theocratic regime, saying that U.S. sanctions are “illegitimate” and are driving Iranians into poverty.

Fox News in a report by Ben Evansky, Adam Shaw wrote: A top U.N. expert is taking aim at the Trump administration’s efforts to tighten the screws on Iran’s theocratic regime, saying that U.S. sanctions are “illegitimate” and are driving Iranians into poverty.

Wait a minute! what did he just say? Let’s continue to the Fox article:

“The Trump administration has been criticized by members of both the U.N. and E.U. leaders for its decision this month to reimpose sanctions of the Islamic regime. The sanctions targeted Iran’s financial, automotive and precious metals industries and will also target its oil and banking system in November. ”

“A senior administration official told Fox News this month that the restored sanctions are designed to constrict the revenue Iran uses to fund “terrorists, dictators, proxy militias, and the regime’s own cronies.”

Idriss Jazairy a former Algerian ambassador who was appointed by the controversial U.N. Human Rights Council (UNHRC) as the special rapporteur “on the negative impact of the unilateral coercive measures on the enjoyment of human rights,” chose to direct his criticism at the U.S.

Jazairy won’t tell you that Iran’s Mullah Regime spends billions on weapons programs & terrorism, while the Iranian people are suffering. In fact, the people of Iran are now chanting:
“Not Gaza, Not Lebanon”
“Forget Syria, think about us”
Why won’t Jazairy even consider this aspect?
Iran spends billions on weapons programs, terrorism while ignoring Iranians’ basic needs, a report finds.
Mr. Jazairy, did the Algerian people fight for freedom for years so that people like you come later and have compassion for another bloody dictatorship?
I have to emphasize here that Jazairy will not tell you that the Iranian people are suffering because they are ruled by a corrupt regime that very easily says “$ 9 billion of government currency has gone missing …”?

Mr. Jazairy, I think you can read  Persian words because you are the defender of Mullahs, please read this:

50 million Iranians are below the poverty line

Mr. Jazairy, the people under Mullah’s rule go on the corner of real hell on earth, but they rise now and say the game is over, for all of Mullahs and it’s supporter like you.
This is the year that the Mullah’s regime will be overthrown by Iranian people hands.

If you and all other appeasement politicians such as Federica Mogiriny stand behind this regime, you are are standing on the wrong side of history.

While Iran’s regime claims its inflation rate hovers around 10%, don’t believe any of that.

Mr. Idriss Jazairy, the mullahs have continued with impunity to violate human rights in Iran, crack down on public protests, launch terrorist operations, and wage catastrophic wars in the Middle East and other countries because somebody like you stands with them! The clerical regime’s reaction to dissent, even inside prisons under their own control, is mass executions!

Mrs, Rajavi very clearly described in her speech in 25Aug in Paris; she said:
” the silence had enabled the clerical regime to carry on with its “crimes against humanity” in Iran.

“The mullahs have continued with impunity to violate human rights in Iran, crack down on public protests, launch terrorist operations, and wage catastrophic wars in the Middle East and other countries,” said Rajavi. “Now, the time has come to end this silence.” Any legitimate protest or demonstration is repressed by the detention and torture of participants,

What are you doing Mr. Idriss Jazairy with these in your face evidence?

Mrs. Rajavi continues:”The time has come for the world community to stand by the people of Iran in their uprising against the religious fascist regime ruling Iran and recognize their determination for regime change. She urged the UN Security Council to prepare for the prosecution of the regime’s leaders, those responsible for the massacre and the officials in charge of four decades of repression and human rights abuses in Iran.

“The clerical regime’s reaction to dissent, even inside prisons under their own control, is mass execution.

“Any legitimate protest or demonstration is repressed by detention and torture of participants.
“In the uprisings last December and January, what was the protesters’ demand and what did they do wrong to be tortured to death?
“The bodies of a number of them were handed over to their families, telling them that they had committed suicide while in detention.
“The regime commits the crime and yet blames the victims of torture and massacre as culprits and criminals.”
Rajavi said the regime’s spies should be expelled from western countries, their embassies closed and relations terminated with a regime that uses diplomatic resources to promote “state-sponsored terrorism”.
She said the People’s Mujahedin Organisation of Iran (PMOI/MEK) was playing an increasingly important role in the organization of protests and resistance against the regime.
“The time has come for the world community to stand by the people of Iran in their uprising against the religious fascist regime ruling Iran and recognize their determination for regime change.
“The resistance units in Iran follow the footsteps of those men and women who said no to the regime and were massacred in 1988.
“The clerical regime is beleaguered by the eight-month-long uprisings, by the growing role of the PMOI and resistance units in organizing and leading the revolts, and by the consequences of a plummeting and drowning economy.”

These are the facts that exist in Iran, but I do not know why the eyes of Mr. Idriss Jazairy
are blind to these facts.

“The reimposition of sanctions against Iran after the unilateral withdrawal of the United States from the Iran nuclear deal, which had been unanimously adopted by the Security Council with the support of the U.S. itself, lays bare the illegitimacy of this action,” he said in the statement published Wednesday
Mr. Jazairy, it seems you want to open a way for this regime to continue it’s Iron Fists rule full of terror and fear….?
Thankfully an honest politician from the USA, Senator Graham, has a very good answer for him: We’re going to bring the Iranian regime down!
We can also read in a Fox website report: “What has broken the backbone of the Iranian economy is the consequence of the policies of the Iranian regime and institutionalized corruption, which has nothing to do with the sanctions,” Alireza Jafarzadeh, deputy director of the National Council of Resistance of Iran (NCRI) told Fox News.
Iranian analyst Heshmat Alavi meanwhile raised the question of Iran’s actions in Syria and said that Iran is spending “billions” there.

(8)
Jazairy also won't tell you that #Iran intends to spend even more on reconstructing #Syria, not providing for ordinary Iranians back home.https://t.co/77jQSdJzbi

Behnam Ben Taleblu a research fellow at the Foundation for Defense of Democracies (FDD) in Washington D.C, told Fox News that Jazairy’s views are out of touch with the Iranian people — who are blaming their own government rather than the U.S.

“To paraphrase and borrow from the Trump administration, there is not a group that has suffered more at the hands of the regime in Tehran that the Iranian people. Iranian protesters, who chastise their own government and not the U.S. for their plight, rightly understand this.” He continued, “One only wishes that the U.N. system did too.”
Hillel Neuer, the executive director of the Swiss-based UN Watch — an independent human rights monitoring group — told Fox News that Iran was the country that sponsored the resolution on behalf of the Non-Aligned Movement in 2014 that created the position that Jazairy now holds.

“The U.N. report ‘makes the astounding claim that the Russian government of Vladimir Putin is a victim of human rights violations and that the perpetrators are the EU and the U.S.,’ said Hillel Neuer, executive director of UN Watch, a non-governmental human rights group.”

“That Jazairy serves as an expert of the UNHRC illustrates the moral corruption of the UNHRC, and underscores why U.S. Ambassador Nikki Haley was absolutely right to call out the utter failure of the discredited council to reform itself.” 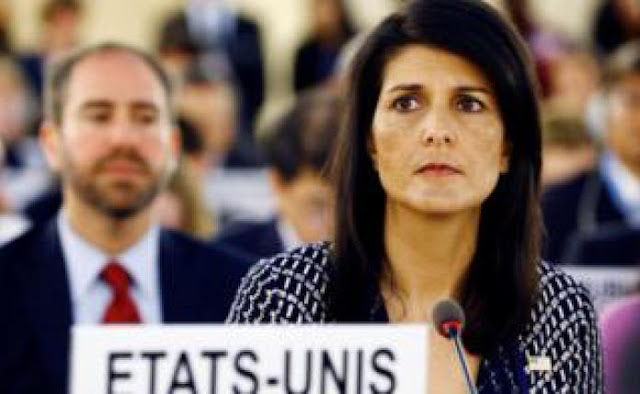 In a hypocritical statement, Jazairy’s comments come on the back of a statement from E.U. leaders, who said they “deeply regret” the U.S. decision to reimpose sanctions.
“The lifting of nuclear-related sanctions is an essential part of the deal,” E.U. High Representative Federica Mogherini, along with French, German and British foreign ministers, said in a joint statement, vowing to “protect European economic operators engaged in legitimate business with Iran.”
In his statement, Jazairy applauded the opposition from the E.U. writes a merciless letter in an attempt to accompany the appeasement leaders in Europe, such as Federika Moghirini.

“I am grateful for the efforts of the European Union in tackling this injustice, both through diplomatic efforts and through legislation to protect European companies from American sanctions. I sincerely hope that the international community can come together to see that the world does not become a battleground for generalized economic war,” he said.

I must say, no sir, the world will not engage in any military and economic war.
It is a crazy policy of appeasement, which has been taking place for far too long.
Shame on you, with the names of grandiloquent, pursue your own personal interests. The people of Iran will never forget their opponents and dictatorial accomplices.

It is good to have some dignity

For too long, the Iranian people have been oppressed by their government, which cares more about sowing instability abroad than its own citizens. The U.S. stands with the brave protesters who yearn for freedom, peace, and an end to corruption in Iran. https://uk.reuters.com/article/uk-iran-economy-protests/price-protests-turn-political-in-iran-as-rallies-spread-idUKKBN1EN0Q3 …

The late Seneator John McCain has cemented his good repuutauion in the history books by staemnts such as these.

Before concluding this article that my mentor Heshmat Alavi and I have worked on, one day we may learn that Jazairy was paid by Iran’s regime to prepare such a report.
And remember, when people like Trita Parsi tweets or RTs something, beware & rest assured there’s some #FakeNews in it.
Special thanks goes to my colleague and my dear friend Heshmat Alavi for his unique work in researching for the information provided within this article.

Minorities in Iran are an Effective Force to Change the Regime

I am a political journalist who focuses on Human Rights issues in the Middle East and around the world but with a deep focus on Iran. I am currently providing my reports to independent journalism outlets such as the one you see here. I will do my best in hope for freedom and democracy in Iran.

Grand March in Brussels, in Solidarity with The Iranian People and Their Uprising

This site uses Akismet to reduce spam. Learn how your comment data is processed.

The Herald Report is the next generation a Real News magazine website, featuring a fully independant team of journalists and thinkers.

They Defame Trump and Embrace Zarif: Don’t Be Surprised…This Is the US’s Liberal Media